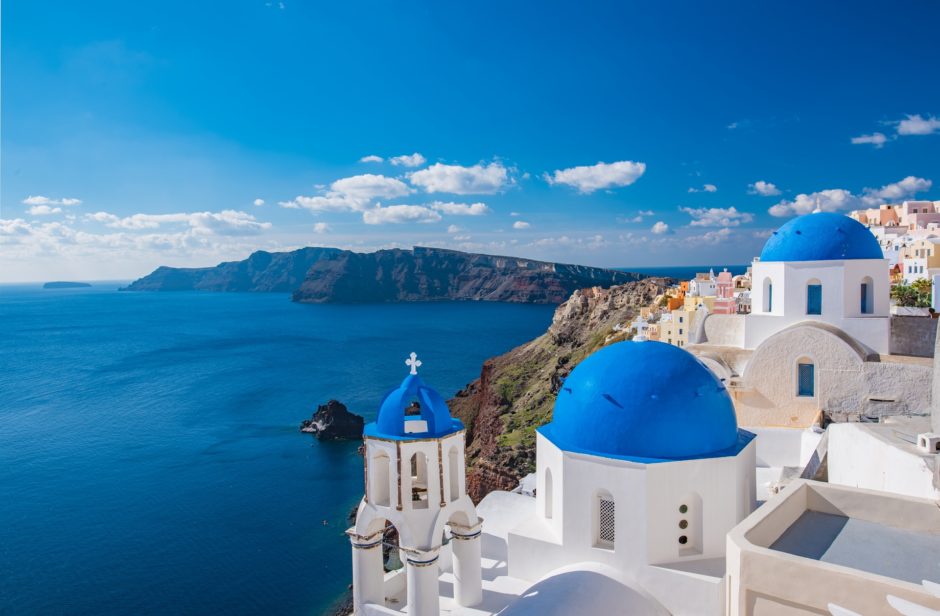 A holiday in Greece is every traveler’s dream. Imagine long days spent relaxing on the stunning sandy beaches and swimming in crystal clear azure waters, while the afternoons slowly lingering into evenings as you enjoy small life pleasures — dining in local taverns with breathtaking sea views. Greece caters to all tastes and ages, from ancient ruins, to cultural wonders, sensational cuisine, heartfelt hospitality and breathtaking natural beauty unlike anything you have experienced before. A trip to Greece is a trip of a lifetime. To help you make the best of your two-week Greece itinerary we have compiled a guide to how to spend 14 days in Greece.

How to Spend 14 Days in Greece: A Two Week Greece Itinerary

Chances are you will be arriving directly into the capital of Greece, Athens. Athens Eleftherios Venizelos International Airport is a hub that connects most European cities directly with Athens, the Greek islands and many other international destinations.

The Greek capital has a lot to offer and we recommend that you dedicate at least two full days to discovering its wonderful offerings. As cliché as it may sound, a visit to the Acropolis is an absolute must.

We recommend that you get to the Acropolis as early as possible to avoid the crowds which usually gather here by noon. Perched on the highest point of the city of Athens, this remarkable UNESCO World Heritage Site dates back to Neolithic period (4000/3500-3000 BC). The crown jewel of the Acropolis, is the Parthenon, dedicated to the goddess Athena. You can either visit the Acropolis at your own leisure or on a guided tour.

You can either buy a single use ticket which grants admission just to the Acropolis or opt for a combined ticket that is valid for 5 days and gives you access to other landmarks such as Ancient Agora of Athens, Archaeological Museum of Kerameikos, Hadrian’s Library, Kerameikos, Museum of the Ancient Agora, North slope of Acropolis, Olympieio, Roman Agora of Athens, South Slope of Acropolis. You can buy your tickets online on the official website of the Hellenic Ministry of Culture and Sports.

What not to miss in Athens

Mykonos, a destination on its own, a playground for the international jet-set, has gained worldwide popularity for its sophisticated flair, bustling nightlife and quintessentially Greek character.  This cosmopolitan island in the Cyclades, is a two and a half hour ferry ride from the Port of Piraeus. There are several ferry boats heading to Mykonos on a daily basis and travel time varies from 2.5 to 6 hours (depending on the ferry).

The main ferry companies which connect Athens with Mykonos are Blue Star Ferries, Hellenic Seaways, SeaJets and Golden Star Ferries. The fastest one is SeaJets and departs from the Port of Piraeus at 7:00am. The price is approximately €60 one way. There are cheaper options, however the travel time is longer. An alternative way to get to Mykonos is by flying from Athens to Mykonos International Airport (JMK), there are numerous daily flights connecting the Greek capital with Mykonos.

To get around Mykonos you can either rent a motorbike, scooter, Quad bike (ATV) or car. Although a car would be a safer option, parking is quite limited near the Mykonos Town. There are several buses running to the popular beaches of Mykonos, the departure point is Fabrika Bus Station which serves Ornos, Agios Ioannis, Platys Gialos, Paraga and Super Paradise Beaches. There are also buses running to and from the airport. To check the routes and schedule click here.

Taxis are available but there is a shortage during high season. The main taxi station is at the Plateia Manto Mavrogenous, inside Mykonos Town (Chora) and queues can be extremely long. Some hotels offer their own transportation services which you can pre-arrange in advance.

What to do in Mykonos

Depending on your interests, Mykonos offers an array of activities from sea kayaking, scuba diving, party beaches, bike tours, food tours, boat trips, shopping and much more. Whether you prefer to spend the whole day lounging at one of the numerous beaches or explore the lesser known Mykonos, the choices are endless.

Santorini is one of the most romantic destinations in the world. Its multi-coloured cliffs dotted with cubic houses, striking sunsets and an aura like no other have positioned Santorini as the most sought after destination to visit in Greece. For those who are visiting Greece for the first time, must definitely add a visit to Santorini to your itinerary.

The best way to get from Mykonos to Santorini is with a ferry. The ferry ride takes 2.5 to 3 hours and there are several daily boats connecting Mykonos with Santorini and vice versa.  The two companies that operate ferries between Mykonos and Santorini are SeaJets and Hellenic Seaways. The price of a one way ticket is approximately €67, please refer to the mentioned ferry websites for reservations and exact prices.

Depending on where you are staying and if you want to explore Santorini, you will definitely have to move around. Walking is not an option if you wish to get from one town to the next. For your convenience you may either rent a car, motorbike, quad or take a taxi. There are also local KTEL buses on Santorini which leave from Fira. You can check out the bus schedule here.  If you only have a few days to spend on Santorini, the easiest and fastest way to get around is by renting a car.

What to see and do in Santorini

Crete is the largest of the Greek islands and we recommend that you allocate at least a week of your trip to discovering its wonders, which are plentiful. Crete’s rich and diverse history, architecture, nature, tradition and cuisine will enchant you. Gorgeous sandy beaches, hundreds of traditional villages, breathtaking gorges, lake, caves and historical monuments dot the landscape of Crete. Not to forget, the warmth and hospitality of its people, is a reason on its own to visit Crete.

To get from Santorini to Crete, the easiest way is with a ferry. Starting from mid-April until late October, two ferries per day run between Santorini – Crete and Crete – Santorini. The high speed catamarans take approximately 2 hours to complete the journey from Santorini to Heraklion. Check out all the options and book tickets here.

Our collection of four sophisticated and traditional villas is located on the outskirts of Rethymnon, in the picturesque village of Asteri and the seaside settlement of Stavromenos, approximately 13 kilometres (20 minute drive) from Rethymnon Town.

Crete is a large island and to make the most of your visit we recommend hiring a car from Heraklion, upon your arrival. Alternatively you may use the public transport, buses run regularly during the summer season however it will take longer to map out your routes. You may check the buses schedule online.

What to do in Crete

Covering the whole island of Crete in a week will be impossible, however you can allocate your travel itinerary between visiting a few towns, depending on your area of interest. Rethymnon region enjoys a prime central location, therefore making it a good starting point for all your day trips around the island.

Upon your arrival on Crete, if you do end up coming with a morning ferry from Santorini and will rent a car, we advise that you spend some hours exploring Heraklion before heading out in the direction of Rethymnon (approximately 80 kilometres).

Crete is the cradle of ancient civilisation and one of the sights not to be missed is the Knossos Palace. It is located at an approximately 20 minute drive from the port of Heraklion. If you are visiting Crete with your children check out our post on What to do in Crete with kids.

Other useful posts to help you plan your trip to Crete

This guide was compiled taking into consideration the distances between islands and how easy it is to access each one of them in order to make the best of your 14 days in Greece. Crete has two main airports which connect directly with Athens and other major European destinations, the Heraklion International Airport and Chania International Airport. You can plan to fly directly out of Crete.

We hope that you find our two week Greece itinerary useful in crafting your trip.

Why to Choose Greece for your Next Holiday