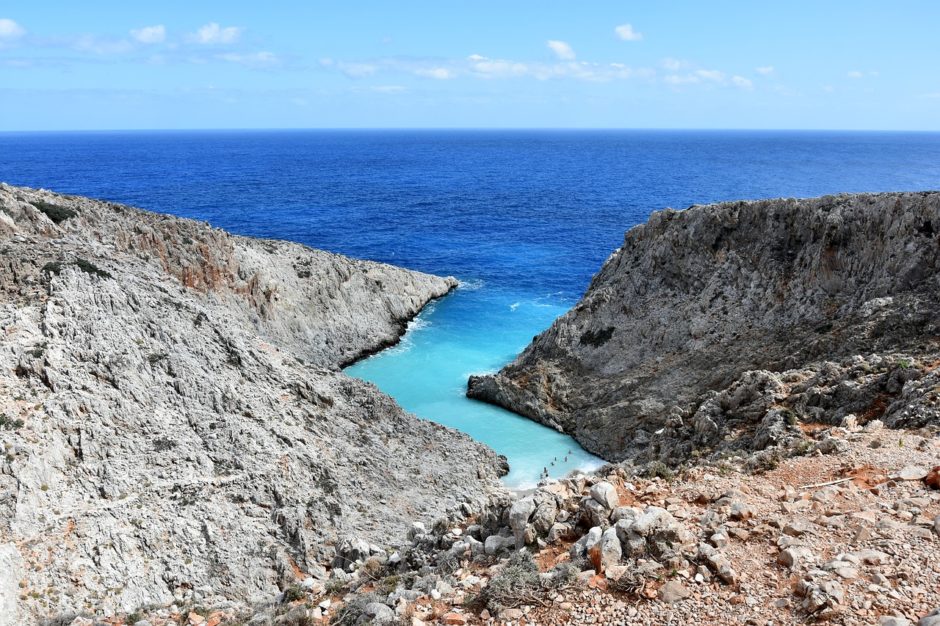 Greece’s largest Island has a landscape full of diverse wonders, heritage of an Ancient civilization, Greece’s most stirring music, the handsomest traditional dress for men, and its own fantastic cuisine- just to scratch the surface. Here are thirty-nine reasons why this splendid island is like no other:

Our 20+19 reasons to fall in love with Crete

Even the winters are sweet on this southern island, where many swim comfortably into November. Crete is by no means a destination for June, July, and August alone.

Unlike many other traditional costumes, the traditional dress of Cretans, particularly of men, is still the everyday wear, especially for an older generation, in many villages. And it’s very becoming- black shirts, tall boots, and a ‘mantili’ for the forehead.

These crisp fried pies of tangy myzithra in whisper thin dough are served with honey for a sweet/savory snack or dessert.

Speaking of Myzithra, it’s delicious: the most popular of Cretan cheeses, this rich, soft, pure white tangy fresh goats’ cheese is delicious on its own and indispensable in Cretan dishes.

Who doesn’t like a pink beach? Especially when it includes a sandy island covered with exotic flowers that you reach by wading through silky waters as warm as a baby’s bath.

These intrepid climbers scale cliffs and mountain sides with no effort at all. They’re as light on their feet as ballerinas

Crete’s most popular honey is from thyme- once you have tried this fragrant honey, every other variety pales in comparison.

You’ll find the Lyre elsewhere in Greece, but no one plays it with the fiery passion of the Cretans. No one.

These melodic rhyming couplets with roots stretching back to the 15th century are Crete’s answer to the Limerick (but usually not as naughty.)

Every village has a main church and the day of its patron Saint is a cause for great celebration- the streets fill with tables for an enormous community banquet.

Traditional village weddings are a three day affair, with musicians and more banqueting (…are you sensing a pattern?)

In every village, the best café is the one under the plane tree. It won’t be fancy, but the coffee will be thick and strong and the conversation lively. (Look for the old men- they know best).

After lunch, life slows down for an hour or so, especially in the summer heat. This is a custom worth emulating, because….

16. Nightlife in Crete is a family affair

Everyone- toddlers, grandmothers, and everyone in between- enjoys the balmy nights to the fullest, feasting on outdoor patios late into the night.

Add a little style to your day- Cretans still dress up a little for the ritual evening stroll.

Forget jasmine- the sweet perfume of an evening primrose on a hot night says Crete like nothing else.

The figs of Crete are fatter, sweeter, more juicy than any you have ever tasted. You’ll be ruined. The figs alone are reason enough to come back to Crete each year.

This beautiful architectural heritage adds a romantic, exotic tone to the harbors- Chania’s, in particular.

If you speak Greek, you will love the lilting, musical sound of Cretan pronunciation.

The Minoans are so much more mysterious than the Ancient Greeks, starting with….

Sir Arthur Evans’ restoration of this great Bronze Age Palace (probably from around 1700 BC) is sometimes criticized for excess, but it none the less brings the mysterious past enticingly to life.

24. The Prince of the Lillies

One of the most beautiful frescoes of the Bronze Age, and a familiar image to many (original at the Archaeological Museum of Herakleion, a copy at Knossos itself)

Few mythical beasts have captured the collective imagination like the Minotaur. His origins lie in the hubris of King Minos, the wrath of Poseidon, a sacred white bull, and the mad lust of Pasiphae, Minos’ wife (it’s a complicated and frankly shocking story….).

The Minotaur was hidden a great maze, designed by Daedalus (you’ll know him from the Myth of Icarus).

This luxurious forest of palms on Crete’s remote eastern shore is an exotic natural treasure, and a fabulous beach, too.

One of the world’s most famous hikes, this stunningly beautiful 16 kilometer gorge brings you from Xyloskalo at 1200 m to Agia Roumeli on the shores of the Lybian Sea of south coast. A boat will bring you to Chora Sfakia.

This mountain village has a marvelous fountain- sweet icy mountain water gushes from the mouths of a long row of lions.

One of the world’s prettiest short drives through the gorge of the same name brings you to the world’s best grilled goat chops- a double must.

Crete’s most famous village is known for its heroism, and for its musical heritage of breeding legendary Lyre players like Xylouris and Psarantonis.

The whole gorgeous town, from the Fortezza to the Rimondi fountain, is a poetic fairy tale.

This hot, thickened cream of goats’ milk is the most delicious thing on any table. Rich as it is, shockingly you eat it with French fries.

This enchanting actress from Crete was Greece’s “girl next door”-  the undisputed queen of the Golden Age of Greek Cinema, beloved not only in Greece but throughout the middle east as well.

Romance with bougainvillea on top, the narrow winding alleys of Chania make one of the world’s most pleasant rambles on a summer night.

This indigenous grape makes a wine with a pale brownish red hue with a rich, haunting aroma like sherry or even cognac. It is heavenly, unlike anything you ever have tasted, and usually comes out of a recycled Fanta bottle.

A wood fired oven is not an uncommon sight in Crete. The bread is heavenly. Moreover, these serve as community ovens- people still sometimes drop off Sunday lunch to roast while they are at church.

Also called tsicoudia, this distilled spirit is the undisputed drink of choice, Pure as mountain water, as strong as it is you’ll still wake with a clear head and a pure heart.

The people of Crete have proven their valor time and time again, against the Ottomans and more recently against the occupying German forces in WWII. Cretan honor is legendary.

We wish you a healthy, happy and prosperous New Year! We look forward to seeing you in Crete in 2019. Which one of the top listed reasons is your favorite?